What a day.  Our morning started off with a delicious Guatemalan breakfast, some great time of fellowship and prayer, and one more broken chair for Team America.

We loaded up and headed out, bound for the Arkansas House.  On our way, we stopped at the Esquipulas Basilica.  Quick back-story courtesy of sacred-destinations.com:

Called the “spiritual center of Central America” by Pope John Paul II, the Basilica of Esquipulas attracts many pilgrims to its miraculous statue of the Black Christ carved in 1595.

The statue of the Black Christ (El Cristo Negro) was comissioned by Spanish conquistadors for a church in Esquipulas. It was carved in 1594 by Quirio Cataño in Antigua and installed in the church in 1595. By 1603, a miracle had already been attributed to the icon, and it attracted increasing numbers of pilgrims over the years.

The history of the Basilica begins in 1735, when a priest named Father Pedro Pardo de Figueroa experienced a miraculous cure after praying before the statue. When he became Archbishop of Guatemala, he commissioned a beautiful basilica to properly shelter the beloved statue. The church was completed in 1759. 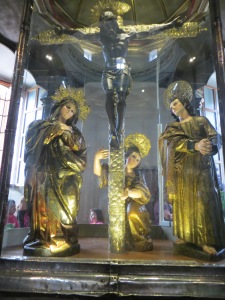 The Basilica is beautiful.  The artistry in the architecture and familiar images of our Lord are truly a sight to see.  The Black Jesus is called so because of the wood the statue is made from-it’s literally black, and is accompanied by other statues and golden accents.  David and Glynis wanted us to see something less tangible to the eyes while we were there;  they wanted us to taste just how deeply rooted Catholicism is in this part of our world.

We stood in line to see the Black Jesus, surrounded by people in line to do the same thing.  Only we didn’t bring with us our money, flowers, gifts, and candles as many of the others did.  We watched as people knelt in prayer and petitioned before the statue.  We even saw a man showing his little girl, maybe 2 years old, where to place her offering, how to reach out to the statue and what hand motions to make while petitioning to El Cristo Negro. Once they were finished praying, they exited the statue’s presence by walking backwards, as to not turn their backs on Jesus.  Once you’re out of the statue’s site, you can turn and walk forward.  They believe that if you turn your back to Jesus, your prayers will not be heard.  It was truly heart breaking to see these people trying to earn what was already theirs for the taking.  All week long we have been hearing that most of the Chor’ti people believe in works vs. faith.  Our experience today just showed us how important the work God has for us to do here truly is.  But how can they call on him to save them unless they believe in him? And how can they believe in him if they have never heard about him? And how can they hear about him unless someone tells them?  Salvation is a gift to all, should we choose to reach out and accept it.

We left the Basilica and continued with our ride to the Arkansas House.  We’re here and I know we’re all ready for a good night’s sleep.  Please continue to lift up the Chor’ti people, and the entire nation of Guatemala.

dulces sueños y’all…remember to praise Him for the gift He’s so freely given. 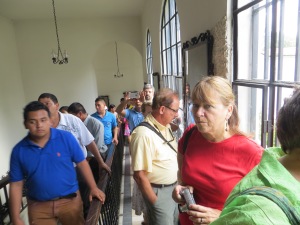 the line to the right (with David and Brenda in yellow and red) is the entry line, and the line to the left (the man in the blue) is the exit line. they are walking backward as they leave the presence of the statue.

Our team at an overlook outside of the city…you can see the Basilica in the background.