Today was our second day on the ground in Chanco, and it was a bit different than we had expected or planned. Not to say this was a bad thing, it just reminded us all that God is in control of all we are doing here. We had planned to stick to our usual schedule of visiting some homes in the morning, then having lunch, followed by story time and games with the kids, then finishing up with some more house visits.

However, as mentioned in the blog yesterday, Miguel’s brother passed away unexpectedly, so the funeral was prepared for today. When we arrived in Chanco, we went to Miguel’s home to pray with the family. We were surprised to see how many people were there, and we noticed all the similarities between the way we all grieve a loss of a loved one. There were many family members there, as well as many people from the community. They were all praying together and consoling each other, and some of the family were preparing a meal to all share together. Pastor Chad prayed over the family and we were able to share in their grief. We were really blessed to have this time, which reminded us that we are all people, under the same God. I (Courtney) was really touched by this moment, and felt that it was a great picture of the Gospel, nations loving each other, the way God imagined it… Overall, just a really sweet time.

Since we were still down one translator, we remained in two teams to visit the houses. This part of our morning was different than expected, due in large part to the fact that many of the people of Chanco were at Miguel’s home supporting the family. Our team tried a few houses, but found no one home. We were finally able to spend some time with one lady, but she was busy preparing lunch, and we wanted to respect her time. At this moment, we began to realize that God had other plans for our team, and I (Anderson) remembered the Lord once telling me that productivity doesn’t always mean fruitfulness. With that, we decided to pray and then head back to our lunch spot. 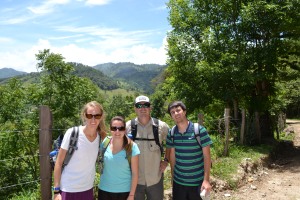 The other team had a somewhat opposite experience with their morning house visit. They were able to meet with a family, and pray healing over the two boys in the family. Christian, the older boy, was having seizures, so Sharon prayed over him. Then Chad prayed healing over the grandson, who was born with a birth defect, not allowing him to hear. The family offered the team coffee and sweet pastries – which they told us were wonderful! (We were a little jealous, ha!)

After lunch, we played with the children and read the story of Moses and the Red Sea. The Children were really responsive to the story, and we actually had them act it out! Also, we had a few girls there today which was helpful! We then played jump the river.. again… so we think that game will probably stick all week. (We’re sensing a theme… and trying to find more bible stories about water!) This was a really sweet way for us to end our day in Chanco after having a tough morning.

At this point we decided to give the community some space and head back to Jocotan. The funeral was scheduled for this afternoon, so we knew not that many people would be home. We wanted to respect them and not be pushy. Once we arrived back at the hotel we were able to spend time walking around the markets of Jocotan and see the city. Tate got a machete and we got donuts! 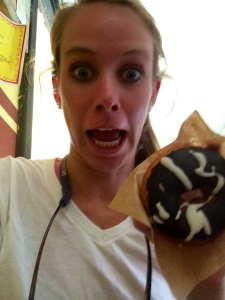 (in the words of Chad, Awwww Yeaaaah)

Please continue to keep Miguel and his family in your prayers as well as the health of our team (nothing major, just stomach issues and scratchy throats).

Thank you for your prayers thus far. It RAINED last night for the first time in a month!!! Also, when we were praying with Miguel’s family they said that they could feel all of our prayers. There truly is power in prayer!