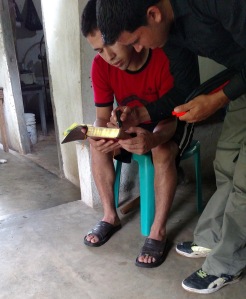 I would like to begin by thanking God for bringing us home safely last night following the showing of the movie,“TheHope” to the people in Chanco. As Anne mentioned on yesterday’s blog, the weather held out perfectly and we had a great showing with the people of Chanco. As we were beginning the drive down from the mountain, the heavy rains began to come down at Charleston level rates, though wet we were able to make it home safely from the
mountain and the dinner that followed. What we didn’t know was a bolt in the engine came loose and caused the fan for the van’s engine to break off just as we were beginning to come down the mountain. As anyone who has visited Chanco before, both coming up and going down the mountain is quite a task for any engine because of the extreme grades and sharp curves. By God’s grace the engine didn’t overheat leaving us to walk home in the downpour along the dark roads leading back to the hotel. 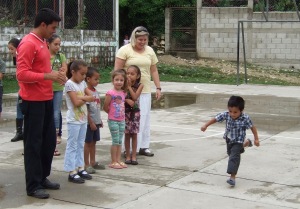 d out with some mild rain which, paired with the needed repairs to the van, threatened our morning plans for the day, which included meeting with the children of Corral de Piedras for games and Bible stories. Fortunately, the rain held off and lots of children showed up. We had great fellowship with the children and I think this time together helped to bring lots of children and their families to the movie we were showing during the evening.

Again, the rain held off long enough for a good crowd to show up and hear God’s truths and the Gospel message. It’s sometimes hard to determine the local’s response to the movie but I definitely think it helped to further explain some of the Bible stories our groups have shared and more importantly I hope it continued to plant and water previous seeds in regards to the need for personal salvation and the Grace that is provided thru Christ alone. 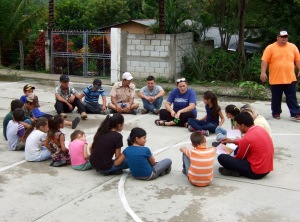